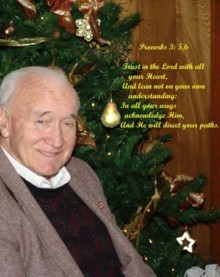 signed byunknown
God saw you getting tired, And a cure was not to be So He put His arms around you And whispered "Come with me." With tearful eyes we watched you suffer And saw you fade away Although we loved you dearly We could not make you stay. A golden heart stopped beating, You 're now at peaceful rest. God broke our hearts to prove to us He only takes the best. God saw you getting weary, And did what He thought best He came and stood beside you And whispered "Come and rest." (An old poem, Author unknown)
Read More

signed byJohn Moetteli
Father, grandfather, brother and husband, Hans Mötteli (Moetteli) has gotten his wings back and is now free, flying the skies of the great blue yonder!  He left this world on 31 May, 2010, surrounded by family, in his home in Garland, Texas. Although a captain himself, his life, particularly the last ten years, has been wholey devoted to his Captain, the Lord of the Universe, Jesus Christ, as he volunteered every moment he was able to the Need-Him ministry in Dallas, Texas, fielding calls of persons in distress who desperately needed purpose in life.  "It's been such a blessing" he would say, being involved in this ministry.   He leaves behind a wife of over fifty years, who cared for him with the patience of a saint over his latter years, and particularly over the last months.  Some of his noteworthy achievements: Having served with Need-Him 8 years, helping many come to a personal knowledge of Jesus Christ. Having been a dedicated member of Grace Bible Church in Dallas for almost 50 years. Married his wife, Miss Esso, 1958, Peru, and first runner-up to Miss Peru 1958. Being the father of 4 children and grandfather to six (with a seventh due only in August of this year) Being accepted in the Swiss Army Aircorps, where he learned to fly Swiss made Messerschmidt C135s, after the second world war. Having accrued more than 30,000 flying hours during his career. Being a member of an early aerobatic Barnstorming troup, performing near Miami, Florida. Having attained the rank of Captain, and flying one of the first Boeing 747s placed into commercial service, affectionately named the "Great Pumpkin", also known as the "Super Carrot" Being a member of the Braniff Silver Eagles since its inception. Having flown to Honolulu, Hawaii, more than 1000 times! Hans flew the following aircraft during his 32 years with Braniff Airlines: CV-440 L-188 Electra DC-6, DC-7, and DC-8 B727 B747-100   (12 years of his 32 with Braniff) (Big Orange, Fat Albert where also nicknames)   He was asked if he would like to fly the Concord but declined due to his love of the B747 and the 6-12 months of flight training in which he thought he was to much at his age.   Hans also flew European routes (mainly to London), and many many South American routes.  He was briefly stationed in Guam and from there would fly to to Saigon to bring in Vietnamese people en route to the U.S.  He also flew for a time to Japan, Hong Kong and twice to Mecca.   The first link below is of the song that Hans's Mom used to sing him (translated in English).  The second link below is the same song in a youtube video sung in the original German (allow it to load completely then play it again to hear it without it breaking up).   http://www.cyberhymnal.org/htm/o/t/otakemyh.htm   O take my hand, dear Father, and lead Thou me,Till at my journey’s ending I dwell with Thee.Alone I cannot wander one single day,So do Thou guide my footsteps on life’s rough way. O cover with Thy mercy my poor, weak heart,Lest I in joy or sorrow from Thee depart.Permit Thy child to linger here at Thy feet,Thy goodness blindly trusting with faith complete. Though oft Thy power but faintly may stir my soul,With Thee, my Light in darkness, I reach the goal.Take then my hand, dear Father, and lead Thou me,Till at my journey’s ending I dwell with Thee.   http://www.youtube.com/watch?v=B6Css-2YOk4   And here's a link from Robert, for our first Father's Day without our Dad nearby.  He says, this is what he'll be singing to us in heaven no doubt!   http://www.youtube.com/watch?v=FafLnokzeNo   Another song he'd sing is entitled "Du, Du liegst Mir im Herzen".    For those who wish to send their condolences, see the below addresses.
Read More
Guest Book

dad, so the queen is with you now. I didn’t realize you both share the same birth year! I’m in London now ( as you certainly know) and tomorrow is the funeral. I guess you’ll have a front row seat ! Love, John

Once again, another birthday Dad! We love you down here and appreciate any help God allows you to give us from upstairs!