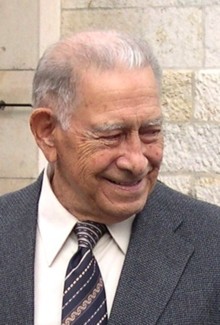 Eulogy to a grandfather

It's been a year now, Says-U! We miss you as much as before! ***** Not having Granddad physically present amongst us will be hard for us to adjust to. No doubt he lives, but in a better place--a place where a few more jokes are cracked, and eyebrow's raised, now that he's there! Although we'll all be reunited with him at the Appointed Day, in the meantime, we can thank God for the blessing of knowing Jorge--a great man not particularly for having done great things (which he did), but for having lived a great, humor-filled life worthy of emulation and remembrance. I'm told he died with dignity and with his great sense of humor. During his death watch, his family surrounding him, although in pain, he would joke with everyone. He'd see his eldest grandson who, twenty years before, gave him an unripe persimmon to taste (an unripe persimmon, to those who know, will give you an incredible pucker you'll not soon forget). He accepted that offer of twenty years before and, of course, never forgot! During the hours just before his death, each time he'd see this prankster grandson, he would say, "You know what this guy did to me? You know? ...He gave me unripe persimmons!" and then he'd make a sour face. A simple memorial service will be held at St. Joseph's Catholic Church in Richardson, Texas on December 5, 2008.  Eulogy to Jorge Eugene Wilcox, 1911-2008 We gather at Jorge Eugene Wilcox’s memorial mass, yet we are not without hope. In the book of Titus (1:2), the Apostle Paul states that we have “hope of eternal life because God, who cannot lie, promised this before the world began”. In the Book of Hebrews (12:1), Paul stated that as we live our life on Earth, a great cloud of witnesses of those who have gone before us watches us from heaven. In the Gospel of Luke (20: 28), Jesus says that “God is not the God of the dead, but of the living; for to God, all men (even the dead) are alive.” In the Second book of Peter (3:8), Peter says that “with the Lord one day is as a thousand years, and a thousand years as one day” Everyone here is blessed, blessed to have known Grandfather, a great man who lived an exemplary life. A man who cared for his family above all else. A man who loved his wife of 73 years more than anything and showed it not by merely saying “I love you”, but by his everyday actions and deeds. By providing for his family. By helping at home, washing dishes and tending the garden. By doing the driving. By always being the one to answer the door. By regularly attending church. By being there for all those who cared to ask for advice, which he never offered unless asked (I for one, wish that I would have asked more often). By loving us all, even through our difficult times. By accepting us all for who we were. And not the least, by telling his jokes and bringing laughter in our lives. He was a great man because he lived a life, like a great film, that we would like to watch and remember again and again. We’re sad now because the story has ended, and we have only our feeble memories as an aid to playing that story over again in our mind’s eye. But we are not without hope. Because according to Jesus’s own words: to God, Granddad still lives.  Because, according to the Apostle Paul, we can hope in eternal life and it may be that Granddad is watching us right now. Because according to Peter, Granddad doesn’t have long to wait for our heavenly reunion. Let us live on with this hope, knowing that every day on Earth is a precious gift, yet rejoicing in the hope of a reunion with Grandfather and all those who have gone before.
Read More
Guest Book

I am so sorry to hear about the loss of Jorge. In the near future God's kingdom that we pray for at Matthew 6:9, 10 will take full control of the earth and death will be done away with brought to nothing, in harmony with 1 Corinthians 15:26. Then we can look forward to seeing Jorge along with our other loved ones we have lost in the resurrection promised at Acts 15:28,29. May the God of all comfort be with your family at this time of need.

To the family of Jorge Wilcox I'm very sorry about your loss. I would like to share some comfort from the scriptures. When somebody we love dies we wonder why but it is often nobodies fault.(Ecclesiastes 9:11) The good thing is we can look forward to seeing them again because of the hope of resurrection.(John 5:28,29)(Matthew 22:31,32) We also find joy in the hope of death being done away with for good.(Isaiah 25:8)(Revelation 21:4)(1st Corinthians 15:26) For now we just need to trust in our God Jehovah because he is our salvation.(Isaiah 12:2)

"Our condolences to you and your family."

"Granddad, I know you're out there, watching, helping. We appeciate that! Love, John"

"He was great, like an president, we will never forget you Jorge!"

"Happy Birthday Granddad! Hope you had a nice one!"

"In memory of a great Grand Father!"

"Hey, Says-U! Thinking about you!"